The magic of the Competition … through the eyes of two winners 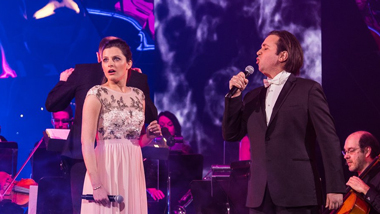 An Interview with Anna-Sophie Neher and Hugo Laporte

In connection with the OSM Competition, dedicated this year to the voice, we met with two former winners: soprano Anna-Sophie Neher (1st Prize in 2017) and baritone Hugo Laporte (Grand Prize in 2014). Both artists generously and enthusiastically shared their reflections on the practice of professional singing while offering some valuable advice for contestants of the Competition.

The OSM Competition and the importance of “being yourself”

Both artists have vivid memories of the final round at the Maison symphonique: “I distinctly remember the excitement we felt coming out onto the stage of the Maison symphonique, Jérémie Pelletier—my collaborative pianist—and I!” recounted Hugo Laporte. A feeling shared by Anna-Sophie Neher: “I still remember my first notes in the final round of the Competition. It was first time singing in such great acoustics. It felt like I was playing with the hall, using it to create effects and try new things.”

It felt like I was playing with the hall!

This year, participants will unfortunately not get the chance to compete in the hall, since the 2021 edition is entirely online. The winner will, however, perform at the Maison symphonique in 2022, in concert with the OSM and Rafael Payare. An online edition brings its share of challenges, as Hugo pointed out: “I find it a major challenge to perform a work without the presence of an audience. Audiences lend an energy, encourage abandoning oneself to the work, to the music, the drama… If I were a contestant, I would give myself more time to mentally prepare myself to sing without an audience. First, I would ‘break’ my program in front of a few people, then do it again another day without an audience. I would alternate like that a few times, as much as possible, to be able to put myself in an optimal state for performing without an audience.” As this baritone indicates, “a competition is not a fight against other contestants. You have no control over the performance of other contestants, only over your own! We have to feel the joy we experience in playing our instrument, in performing each work on our program.” For her part, Anna-Sophie emphasizes, “being yourself on stage as well as off stage and being gentle and understanding towards your voice, yourself and others.”

Vocalises and droplets during a pandemic

It would have been difficult enough to predict that vocal projection, something sought after and admired in vocal artists, would block them from the stage in the context of the pandemic. Singers have indeed been especially affected by distancing measures established for the arts. While she was not able to be there in person, Anna-Sophie was nonetheless able to pursue her training from home with the Canadian Opera Company’s Ensemble Studio: “We obviously could not put on an opera, but it enabled us to work on plenty of other aspects of opera that we often lack the time for.” Hugo, meanwhile, had to cope with the vicissitudes of uncertainty: “I quickly gave up hoping for a return to normal, otherwise I would just constantly be disappointed. I began bit by bit to do online projects, on social media or webcasting platforms.” This return to normal gradually came about, first with the Opéra de Québec in May 2021, then at the Festival d’Opéra de Québec in July. For her part, Anna-Sophie is grateful to the OSM for letting her return to the stage as early as December 2020: “I will not soon forget the Messiah concert in December. It was my OSM debut, under the direction of Maestro Bernard Labadie, whom I greatly admire. And I was more than seven months pregnant! After several months confined to my small studio, it was magical to sing elsewhere and to share the stage with friends and colleagues.”

By giving numerous artists the opportunity to perform throughout the pandemic, the OSM helped them maintain a grasp on their art. The OSM Competition served the same function by supporting young Canadian musicians, also severely affected by a string of cancellations. Just as concert halls reopened their doors and audiences rediscovered the importance of concerts “in person,” projects began to turn up for these two young artists. Anna-Sophie is currently in Paris singing the role of Antigone in Enescu’s Œdipe, from September 20 through October 14, 2021, while Hugo is billed with several Quebec orchestras and opera houses. Both are involved in the same large-scale project: a recording of Massenet’s complete mélodies featuring some of the finest Quebec voices.

Anna-Sophie became a mother during the pandemic, while Hugo is also raising two young children. But is a young family compatible with a career as a singer? Far from popular belief, according to which such a career requires total sacrifice of one’s personal life, Hugo and Anna-Sophie are living examples that these two spheres can be reconciled: “To be sure, family and career can come into conflict sometimes, even regularly. One needs to reach a consensus with one’s partner and contribute to family life the best one can. It is entirely feasible and there are many examples in the artistic milieu to prove it!” affirms Hugo. Anna-Sophie maintains that we can customize our careers according to our needs: “A career as a singer does not necessarily mean constantly travelling abroad to sing. We make the life we want based on what is important to us.” Having taken her very young baby to Paris with her, Anna-Sophie is proof that you can go sing with the Opéra de Paris while staying close to your family!

3 skills for making a career as an opera singer, by Hugo Laporte

1. Going beyond: One must continually set new goals for oneself, want to do better, and know how to doubt oneself without being too hard on oneself. When we think we have achieved everything we wanted, we stop improving.

2. Vocal health: A healthy and solid vocal technique is essential, a labour that continues throughout one’s entire career.

3. Passion: This profession should be undertaken with passion for the art. The musician’s career is very demanding, and the rewards are not necessarily attractive, except for the tremendous feeling of satisfaction that comes with practising our art.

Outside of opera, both artists lead stimulating lives. Hugo practises photography, a talent that can be appreciated by visiting his website. Anna-Sophie has recently moved to the country and plans to welcome a few chickens to her yard by next year. There is no shortage of projects for these two laureates of the OSM Competition: accomplished artists whose careers are soaring, who are passionate about the art they practise on a daily basis, they are proof of the value of stepping-stones like the OSM Competition. Over and above guidance from the jury and scholarships, the Competition imparts a bit of magic to fuel the passion and curiosity of those who, in the future, will tread the stages of major venues around the world.